World End is one of the four skins released in the Doomsday offer. It could be purchased on an individual basis using game coins in late April 2021.

World End could be purchased in the Skins Shop under the 'Doomsday' tab for 2390 coins. It was available for a limited time and may not return in the future.

Note: The Doomsday offer was released again for a limited time in late September 2021. The price for World End remained at 2390 coins for this release. 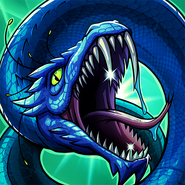