Wojak is one of the face skins in Agar.io. It can be used by typing "Wojak" in the nickname box before the game begins. Than the player's cell will become a drawn face of Wojak. 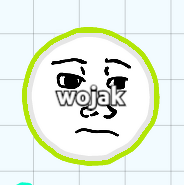 In Game Example
Add a photo to this gallery

Retrieved from "https://agario.fandom.com/wiki/Wojak?oldid=40777"
Community content is available under CC-BY-SA unless otherwise noted.