Wicked Clown is one of the three skins released under the Wicked Circus part of the Circus offer. It could be purchased as part of an item deal for a limited time in early December 2017.

Wicked Clown could be purchased for $19.99 in the "Best Deal!" which included the Grizzly skin and 1800 DNA. It was not available for individual purchase and may not be available for purchase in the future. 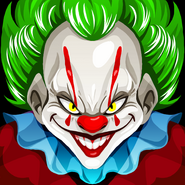