Not to be confused with Virus (Skin).

A Virus is a green cell that can be used offensively and defensively. If a cell consumes a virus, it will "pop", sending out 15 or fewer bite-sized bits of the cell in different directions. A cell can eject 7 times to fire a virus, sending another virus into a cell.

Viruses appear to be large, green, and bush-like circles with tiny spikes on their edges, reminiscent to those of a blade. In Teams Mode, FFA Mode and Party Mode, a virus will grow larger depending on the amount of mass you give it (can be done by pressing W).

Viruses can be used for both offense and defense, as they are commonly used by smaller, weaker cells to consume larger, more challenging cells. They can also be used to get mass quickly as 1 virus eated give the eater +100 mass.

A new virus can be created by a cell by ejecting a maximum of 7 blobs using the W key. When the virus is given the 7th blob, it will eject another virus in the opposite direction of the last pellet that fed the virus. This mechanic is often used to attack larger cells who would otherwise be impossible to consume for the player. Keep in mind that when a cell is in range to give mass to a virus, it is also in range for the ejected virus. Ejecting viruses at other cells has considerable risk of counterattack. Viruses that are closer to ejection appear swollen and have more spikes.

In experimental mode, viruses behave differently. Rather than a whole new virus being created when fed mass, they will instead "slide" a length in the aimed direction depending on the amount of mass injected into it.

Viruses are no longer able to be duplicated in Experimental mode. Instead of launching a second virus hurling in the opposite direction of the oppressing cell, the virus will move a small length forward for each amount of mass given to the virus. This can be a lot more mass-consuming, and it makes it a lot more challenging to launch a successful virus into a cell. On the plus side, this also means you can move a virus out of your path without eating it.

The spawner virus introduced in experimental mode is a lot different than its default counterparts. Spawner viruses tend to be much larger than normal viruses and have a special orange-brown color as opposed to the green color of a normal virus. These viruses will occasionally dispense mass in the form of pellets. A spawner cell can be fed "W" mass, dispensing it out in the form of pellets. This is useful for "instant merging", when cells split in two decide they want to combine earlier by feeding their smaller parts to the spawner virus and collecting the pellets afterward. Be warned, as this does not stop opponents from taking the mass as well. A cell cannot "hide" inside this virus as it can with a default virus, as it will consume the cell and disperse its mass via pellets. If a cell is close to the same size as the spawner, they may enter the spawner virus without worry of explosion or death but should take caution as opponents could feed the cell, causing it to explode due to being too big, or be consumed into the spawner virus should the opposing cell feed the virus instead. If a cell is bigger than a spawner virus and it consumes it, then it will behave as a normal virus, dispersing the cell into several pieces.

In Experimental Mode on 2015-06-11, this virus had a 5% chance to naturally spawn instead of a regular virus. When consumed, it had the same effect as a normal virus, splitting the cell into several smaller cells. These viruses were larger and darker than normal viruses, requiring more mass to consume or eject. It took 16 mass ejections (~255 mass) to eject a dark virus. A mass of ~300 was needed to consume a dark virus as a single cell (~320 as multiple cells). When consumed while having the max number of cells, dark viruses added ~255 mass to the player's cell. Dark viruses were removed the next day, on 12th Of June，2015.[1][2]

The experimental mode added a twist to the existing normal virus, changing what happens when a player ejects mass into it. Instead of shooting out another virus, ejecting mass into a virus causes it to move away from the direction of the ejection. Each ejection makes the virus move 1-2 squares on the map, accelerating with faster ejections. This action makes the virus ejections easier to dodge and counter, as well as forcing cells to use viruses they find rather than creating more themselves. This also removes the problem of moving around the original virus to eat a cell that you have just split with an ejected one. 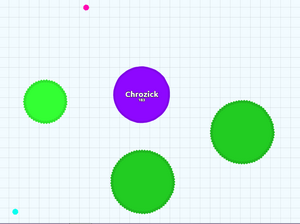