Note: Turkey was released again as part of a modified version of the original Thanksgiving offer in early October 2019. This time Turkey could be purchased for $12.99. This limited time deal included a package of 10000 coins and 500 DNA. 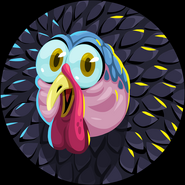