Time Doctor is one of the two skins released under Quantum Machine part of the Time Travel offer. It could be purchased as part of a coin deal for a limited time in January 2017.

Time Doctor could be purchased for $19.99 in a deal that included the Time Dude skin and 50000 coins. It was not available for individual purchase and may not be available for purchase in the future.

Details of this offer may vary depending on location, platform or time.

Note:The Time Heroes sub-offer with the Time Doctor skin has been released multiple times after the original release. Each release may have had different prices and included items. 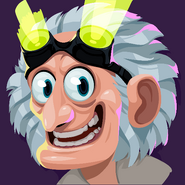