Stone Tool is one of the three skins released as part of the Stone Age coin deal. It could be purchased as part of an item deal for a limited time in mid May 2017.

Note: The Stone Age offer with the Stone Tool skin was released again for a limited time in early March 2019. This time the deal that included 16000 coins was lowered to $4.99. The Best Deal was lowered to $9.99 and only included 30000 coins. The package of DNA was no longer included as an option. 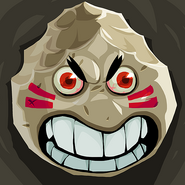