Star Sentinel is one of the six skins released under the Superheroes offer. The design of this skin is inspired by the DC Comic's superhero Wonder Woman. Star Sentinel could be individually purchased with game coins in November 2016.

Star Sentinel could be purchased in the Skins Shop under the ‘Super Heroes’ tab for 2900 coins. This skin was available for a limited time and may not be available for purchase in the future.

Note: The Superheroes offer with the Star Sentinel skin was released again for a limited time in mid May 2019. The price for Star Sentinel remained the same at 2900 coins. 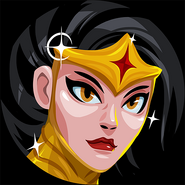