Splitting is an ability that players can use. It causes the player’s cell to split into 2 pieces every time the space key is pressed. It can be used both offensively and defensively. For example, you could split onto a smaller cell to eat it, or you could split away from a larger cell.

Splitting can be performed by pressing the space bar in the browser version. When splitting, all cells that are big enough will send half of their mass in the direction the cursor is facing. To be able to split, a cell needs to have at least 35 mass.

The split cells will be able to merge back together after a certain time. Steering one into the other is how to merge them back, which is generally done by placing the cursor in between the two. There is a cool down on merging cells together, meaning that a certain amount of time must pass before two cells are able to merge after splitting. The cool down time is calculated as 30 seconds plus 2.33% of the cells mass (e.g. if mass is 50, the cool down time is 31 seconds). If the player has more than 8 pieces that are big enough to split, the pieces that split will be the ones which split earlier previously.

Consuming a virus will cause a player's cell to gain 100 mass in every game mode except Teams Mode. The player will forcefully be split into many smaller cells in the process, up to the maximum of 16. These are usually of equal size, but if the player's cell is too large for this, it will simply reduce in size, with many smaller and equally sized cell being split off from it. If a player already has 16 cells, they will gain the virus' mass without splitting further.

In Teams Mode, you can split through a teammate's cell, making for a good surprise attack. If you see a cell that is crashed to a virus, splitting and eating them is a very good attack, making you bigger.

Normal Split is when a cell purposely splits by pressing the space key on their keyboard. One cell has to have at least 35 mass in order to split. In the moment of split, the ejected cell travels about 12 grid-spaces.

This happens when a player that has less than 16 pieces consumes a virus. The popped cell will gain +100 mass, but will also pop into 8-16 pieces. If the player has 16 cells, they will get +100 mass without popping.

In Team Mode, you can't get this bonus.

When a cell reaches 22,500 mass, it automatically splits in a direction that usually doesn't match with the cursor position. Autosplits can be tricky when you are playing against a cell that has 21k mass. A common strategy in party mode fights is for a team member to feed an enemy cell to make them slightly above 22,500 mass to make them auto split.

If you are wondering about pop splits, vanish splits, trick splits etc, they are listed on the Advanced Tactics page.

Splitting is a core mechanic in Agar.io, and is involved in many different strategies.

The most common strategy is using splitting to eat a cell which would be too fast for a quite larger one to eat. The ideal size to perform this trick would be approximately 2.66-4 times bigger than the prey. The ideal scenario would be a cluster of medium-sized cells to throw the split cell to. However, a split cell, unlike a single cell, must be 33% larger than the cell it tries to consume (a single cell only needs to be 25% bigger than its target). It is also possible to profit off of the vulnerability of a recently-split large cell by eating its children via splitting, thus gaining a lot of mass. Be careful to split only when you are sure that you are sufficiently larger than the cells you are attempting to consume. Misjudging this may cause the split cell to instead be consumed by your target, which can lose you a large chunk of your mass, and may even lead to being consumed in return entirely.

Players already at the maximum of 16 cells can consume a virus or spawner with no ill effects, gaining 100 and approximately 224 mass respectively, in any game mode besides teams mode. Viruses in team mode do not give mass when eaten. Though it is risky to remain split into 16 cells, this allows for some very easy gains in mass, and can be a very successful strategy when done carefully.

Players often bait other cells by ejecting mass. A player with 300 or more mass, may eject 3 or 5 mass, then split on a player that attempts to consume the ejected mass.

Splitting is an important mechanic in teaming. It is preferable to ejecting mass because it is more efficient, and allows for faster transfers of mass. One strategy entails two relatively equal sized cells and a support cell. When your friend splits, he will give you his/her one cell. If you found a stopped player and you are unable to eat it, your teammate can help you by ejecting mass or splitting towards you.

If you are in 2 big merging pieces, you can hit a virus. You will have many small pieces, and those 2 pieces will be able to merge immediately. Other cells may come near you to try and eat your small pieces, thinking that you can't split as you are in 16. Just press space, and surprise split on them. Even if they are a bit too far away, you can use your small pieces to push your big piece. You can split for them even if they are behind a virus, as you would be in 16 pieces after splitting, and can just eat the virus without popping. 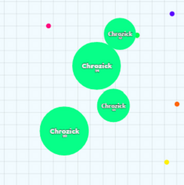 Lots of different people all around the world split! This is a person splitting

nolan who has recently split
Community content is available under CC-BY-SA unless otherwise noted.
Advertisement