Space Hunter is one of the five skins released under the Alien Invasion offer. The design of this skin is inspired by the alien Predator from the movie franchise of the same name. Space Hunter could be purchased on an individual basis with game coins in May 2016.

Space Hunter could be purchased in the Skins Shop under the 'Aliens' tab for 4900 coins. It was the most expensive skin in the Alien Invasion offer. Space Hunter was available for a limited time and may not be available for purchase in the future. 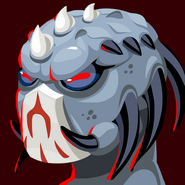