Skull Samurai is one of the three skins released under the Ronin's Revenge part of the Samurai offer. It could be purchased as part of an item deal for a limited time in mid October 2017.

Skull Samurai could be purchased for $19.99 in the "Best Deal!" which included the War Mask skin and either 50000 coins (Browser) or 1800 DNA (Mobile). It was not available for individual purchase and may not be available for purchase in the future.

Note: The Ronin's Revenge sub-offer has been released multiple times after the initial 2017 debut. While the skins remained the same, the prices and included game items varied between releases. The details for all additional limited time releases for the Skull Samurai skin are as follows: 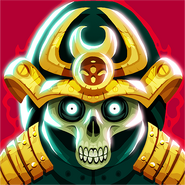