2017 (November)
Skull Bow is one of the three skins released under the Final Attack part of the Anime (Volume II) offer. It could be purchased as part of an item deal for a limited time in early November 2017.

Note: The Final Attack part of the Anime offer was released again for a limited time in late August 2020. While the skins remained the same, the included game items and prices changed to the following: 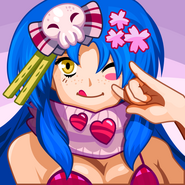