Sheriff is one of the three skins released under the Master of Thieves offer. The design of this skin is inspired by the Sheriff of Nottingham from the English folklore of Robin Hood. Sheriff could be individually purchased using game coins in February 2017.

Sheriff could be purchased in the Skins Shop under the 'Thieves' tab for 1990 coins. It was available for a limited time and may not be available for purchase in the future.

Note: The Master of Thieves offer was released again for limited times in mid December 2018 and then in late August 2021. The price for Sheriff remained at 1990 coins for each of these releases. 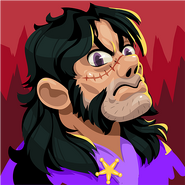