Shadow Man is one of the three skins released under the Dark Dimension Zone offer. It could be purchased individually using game coins in early March 2018.

Shadow Man could be purchased in the Skins Shop under the 'Dark Zone' tab for 1900 coins. This skin was available for a limited time and may not be available for purchase in the future.

Note: The March version of the Dark Dimension Zone offer has been released multiple times after the original 2018 debut. Other limited time releases were in late June 2019, early November 2020 and finally in early June 2021. The cost for Shadow Man remained at 1900 coins for each of these releases. 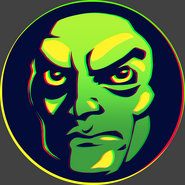