The Seal skin can be purchased in the store for 2550 coins. When equipped, the player's cell will appear as a seal leaning back with a cyan background, it is also one of the meme skins. 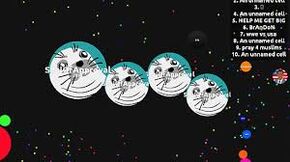 A player using the skin.
Add a photo to this gallery
Retrieved from "https://agario.fandom.com/wiki/Seal?oldid=33707"
Community content is available under CC-BY-SA unless otherwise noted.