Battle of the Gladiators

Reptilian could be purchased in the Skins Shop under the 'Gladiators' tab for 2900 coins. This skin was available for a limited time and may not be available for purchase in the future. 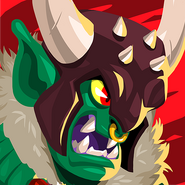