Agar.io Wiki
Register
Don't have an account?
Sign In
Advertisement
in: Store Skins, Skins added in 2017, Skins,
and 3 more

Raspy Elf is one of the three skins released under the Santa's Gang part of the Santa offer. It could be purchased individually with game coins in late December 2017.

Raspy Elf could be purchased in the Skins Shop under the 'Christmas' tab for 690 coins. This skin was available for a limited time and may not be available for purchase in the future.

Details of this skin may vary depending location, platform or time.

Note: The Santa's Gang sub-offer was released again for a limited time in mid December 2020. The price for Raspy Elf was increased to 1090 coins for this release. 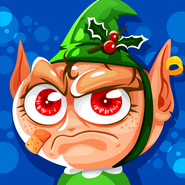