Agar.io Wiki
Register
Don't have an account?
Sign In
Advertisement
in: People Skins, Skins, Skins added in 17 July 2015,
and 6 more

Putin is one of the people skins in Agar.io. It can be used by typing "Putin" in the nickname box before the game begins. Then the player's cell will become the flag of Russia with the image of Russian president Vladimir Putin.

This is probably one of the most popular skins among Russian players of Agar.io. Putin skin has been added on July 17, 2015 together with other 6 political leader skins: 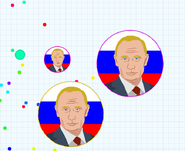