Omega Blast is one of the two skins released under the Mega Battle part of the Superheroes offer. It could be purchased as part of a coin deal for a limited time in November 2016.

Note: The Mega Battle sub-offer with the Omega Blast skin was released again for a limited time in early February 2019. This time the deal that included 7000 coins was lowered to 3250 coins at $1.99. The Best Deal was lowered to $9.99 with the included coins being lowered to 30000 . 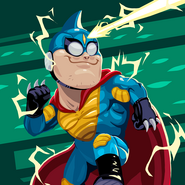