Agar.io Wiki
Register
Don't have an account?
Sign In
Advertisement
in: Skins, Skins added in 17 July 2015, People Skins,
and 5 more

Obama is one of the people skins in Agar.io. It can be used by typing "Obama" in the nickname box before the game begins. Then the player's cell will become the flag of USA with the image of Barack Hussein Obama, the 44th President of the United States. 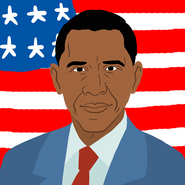