Mystery Potions are a type of Potion that can be earned based on game performance. These potions have to be brewed for a certain amount of time before they can be opened. However, they can be opened instantly by using the DNA currency. Only one potion can be brewed at a time with a storage limit of three. Rewards from opening Mystery Potions include Coins, Trophies, Mass Boosts, XP Boosts and Skin Pieces.

The five types of Mystery Potions are Common, Rare, Exotic, Mystical and Battle.

If already brewing, the DNA required to open a Potion is lowered to reflect the elapsed brew time. All Potions can occasionally contain in-game Boosts as well.

There is a simple strategy to get better potions. The problem is that if you have for example one free potion slot, start a game and die fast, the slot will be filled with a common potion. If you then start another match and survive for a long time with much mass, you will not be rewarded with a mystical potion, because all slots are in use.

The strategy if all potion slots are in use is to have at least one potion that has completed its brewing but not been opened yet. If you die fast in a match, nothing is going to happen since all slots are in use. But if you realize you are having a great match that qualifies you for a good potion, open the menu by pressing the esc key then open the prepared potion. Once you have an open slot, continue playing until you finish the match you will receive a good potion. 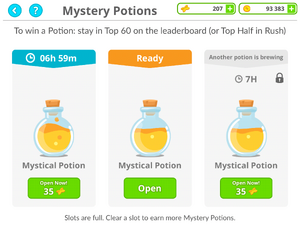 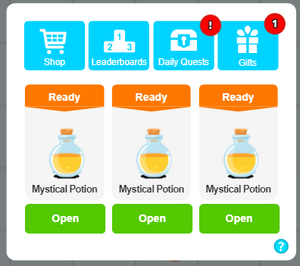 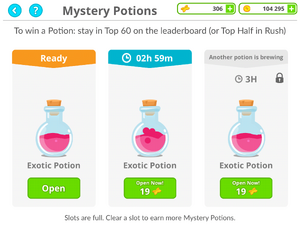 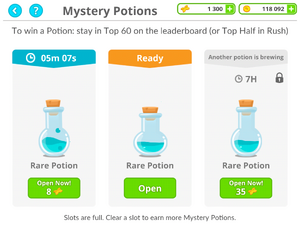 Rare Potions - Three in various states
Add a photo to this gallery
Retrieved from "https://agario.fandom.com/wiki/Mystery_Potions?oldid=48453"
Community content is available under CC-BY-SA unless otherwise noted.