Mega Mecha is one of the six skins released under the second volume of the Anime offer. The design of this skin is inspired by the anime Neon Genesis Evangelion. This skin was available for individual purchase using game coins in early November 2017.

Mega Mecha could be purchased in the Skins Shop under the ‘Anime’ tab for 490 coins. It was available for a limited time and may not be available for purchase in the future.

Note: The Anime Vol. II sub-offer has been released multiple times after the initial 2017 debut. While the included skins remained the same, the prices varied between releases. The dates and prices for all additional limited time releases for the Mega Mecha skin are as follows: 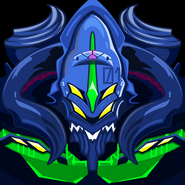 Mega Mecha - Original Image
Add a photo to this gallery
Retrieved from "https://agario.fandom.com/wiki/Mega_Mecha?oldid=45673"
Community content is available under CC-BY-SA unless otherwise noted.