Killer Octopus is one of the many skins released in the monthly Predator Skin Collection. It could be purchased as part of an item deal in early June 2020.

Note: This edition of the Predator Skin Collection was released again for a limited time in mid April 2021. The price and included game boosts for Killer Octopus remained the same for this release. 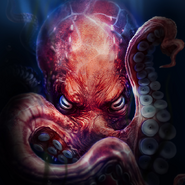 Killer Octopus - Full Size
Add a photo to this gallery
Retrieved from "https://agario.fandom.com/wiki/Killer_Octopus?oldid=48128"
Community content is available under CC-BY-SA unless otherwise noted.