Insectoid is one of the three skins released under the Ninjas vs Robots offer. It was available for individual purchase with game coins in early September 2017.

Insectoid could be purchased in the Skins Shop under the ‘Ninjas x Robots’ tab for 1900 coins. This skin was available for a limited time and may not be available for purchase in the future.

Note: The Ninjas vs Robots offer was released again for limited times in early June 2019 and then in late April 2021. The Insectoid skin was again available for 1900 coins in each of theses releases. 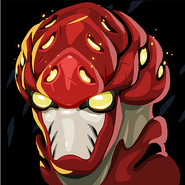