2017 (January )
Husky Brawl is one of the two skins released under the Showdown Edition of the Beast Fighters offer. The skin is an angry husky with boxing gloves and a blue background. It could be purchased as part of an item deal for a limited time in January 2017. 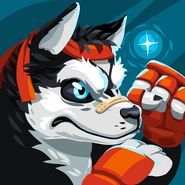