Hades is one of the three skins released under the Heavens of Olympus part of the Olympus offer. It could be purchased as part of an item deal for a limited time in early September 2017.

Note: The Heavens of Olympus sub-offer was released again for a limited time in early October 2019. The deal that included Hades and a package of coins remained at $4.99. However, the included coins were increased to 5000. The Best Deal was lowered to $14.99 on browser and stayed at $19.99 on mobile. A package of 1200 DNA was included on both platforms this time. 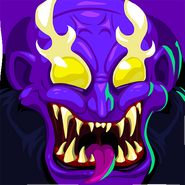 Hades - Original Image
Add a photo to this gallery
Retrieved from "https://agario.fandom.com/wiki/Hades?oldid=47578"
Community content is available under CC-BY-SA unless otherwise noted.