2017 (November)
Giant Human is one of the three skins released under the Final Attack part of the Anime (Volume II) offer. The design of this skin is inspired by the anime and manga, Attack on Titan. This skin could be purchased as part of an item deal in early November 2017.

Giant Human could be purchased for $19.99 in the limited time "Best Deal!" which included the Skull Bow skin and either 50000 coins (Browser) or 1800 DNA (Mobile). It was not available for individual purchase and may not be available for purchase in the future. 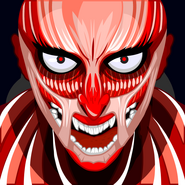