Football Strike is a free promotional skin released in mid September 2017. It was offered to promote the mobile game Football Strike.

Football Strike became available to all players after 150,000 downloads of the game was reached. It could then be collected in the Skins Shop under the ‘Free’ tab. However, the ability to collect or purchase this skin in the future may be limited.

Details of this skin may vary depending on location and platform. 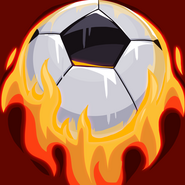