Agar.io Wiki
Register
Don't have an account?
Sign In
in: Skins, Skins added in 2017, Limited Skins,
and 2 more

Elite Pilot is one of the three skins released under The Red Planet part of the Last Master offer. It could be purchased as part of an item deal for a limited time in late December 2017.

Note: The Red Planet sub-offer was released again for a limited time in mid January 2021. The item deals with Elite Pilot were updated to the following: 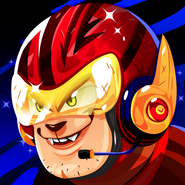