Easter Chick is one of the three skins released in the Bunny's Delight coin deal offer for Easter. This skin was available for purchase for a limited time as part of an item deal in mid April 2017. 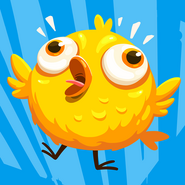