Agar.io Wiki
Register
Don't have an account?
Sign In
Advertisement
in: Skins, Skins added in 2017, Food skins,
and 4 more

Dumpling is one of the three skins released in the Chinese New Year offer. It could be purchased individually using game coins in January 2017.

Dumpling could be purchased in the Skins Shop under the ‘Chinese NY’ tab for 2900 coins. This skin was available for a limited time and may not be available for purchase in the future.

Note: The Dumpling skin has been released multiple times in separate offers after the initial 2017 debut. The details for all additional limited time releases for the Dumpling skin are as follows: 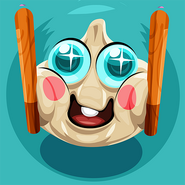