Droid is one of the three skins released as part of the Ghost in the Machine offer. It could be purchased as part of an item deal from late March to early April 2017.

Droid could be purchased for $9.99 in a limited time deal that included 16000 coins. It was not available for individual purchase and may not be available for purchase in the future.

Note: The Ghost in the Machine offer was released again for limited times in mid January 2019 and then in early September 2021. The item deals with Droid were updated to the following for these two releases: 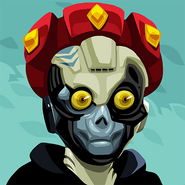