2017 (April - May)
Destroyer is one of the three skins released as part of the Action Heroes (Volume 1) offer. Destroyer is inspired by characters portrayed by veteran actor Arnold Schwarzenegger. It could be purchased as part of an item deal for a limited time in late April to early May 2017.

Note: The first volume of the Action Heroes offer was released again for a limited time in late January 2019. This time the deal that included 3250 coins was lowered to $1.99. The Best Deal was lowered to $9.99 and only included 1800 DNA. 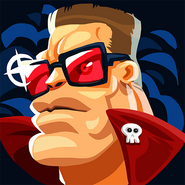