Agar.io Wiki
Register
Don't have an account?
Sign In
Advertisement
in: Skins, Skins added in 2016, Limited Skins,
and 2 more

Dark Wings is one of the two skins released in the Conjurer's Dream offer. It could be purchased for a limited time as part of an item deal in December 2016. 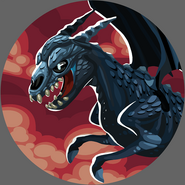