Note: The Ghost in the Machine offer with the Cyber Agent skin was released again for a limited time in mid January 2019. This time it could be purchased for $1.99 including a package 3250 coins or for $9.99 with the Detective skin and 1800 DNA. 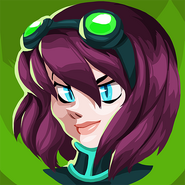 Ghost in the Machine - Offer Ad
Add a photo to this gallery
Retrieved from "https://agario.fandom.com/wiki/Cyber_Agent?oldid=38635"
Community content is available under CC-BY-SA unless otherwise noted.