Captain Skull is one of the five skins released under the Pirate Skins part of the Pirates offer. It could be individually purchased with game coins in August 2016.

Pirate Maiden could be purchased in the Skins Shop under the ‘Pirates’ tab for 2900 coins. This skin was available for a limited time and may not be available for purchase in the future.

Note: The Pirate Skins sub-offer with the Captain Skull skin was released again for a limited time in early May 2019. The price for Captain Skull remained the same at 2900 coins. 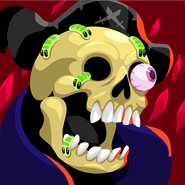 Captain Skull - Small Circled
Add a photo to this gallery
Retrieved from "https://agario.fandom.com/wiki/Captain_Skull?oldid=39901"
Community content is available under CC-BY-SA unless otherwise noted.