2016
Cactus was a skin added in 2016 as part of the Cinco de Mayo update and is the most popular skin from the update. It could be purchased for a limited time in the Agar.io store for 690 coins. 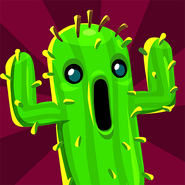 Cactus - Full Size
Add a photo to this gallery
Retrieved from "https://agario.fandom.com/wiki/Cactus?oldid=44190"
Community content is available under CC-BY-SA unless otherwise noted.