2020 (October)
Big Power is one of the two skins released under the Anime Nation IV part of the Anime offer. It could be purchased as part of an item deal for a limited time in early October 2020.

Note: The design of this skin is inspired by the character All Might (Toshinori Yagi) from the anime and manga series called My Hero Academia. 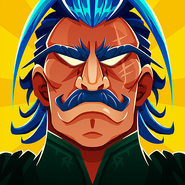 Big_Power - Full Size
Add a photo to this gallery
Retrieved from "https://agario.fandom.com/wiki/Big_Power?oldid=46316"
Community content is available under CC-BY-SA unless otherwise noted.