2018 (September)
Ancient Relic is one of the two skins released in first part of the Ark Raider's Mystical Shop offer. It could be purchased as part of an item deal in mid September 2018.

Ancient Relic could be purchased for $7.99 in the limited time "Best Deal!" which included 25000 coins, 1200 DNA and the Mad Fragment skin. This skin was not available for individual purchase and may not be available for purchase in the future.

Note: The first part of the Ark Raider's Mystical Shop offer was released again for a limited time in early April 2020. The included items and amounts for Ancient Relic remained the same. However, the price increased to $9.99 on mobile while remaining at $7.99 on browser. 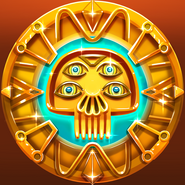 Ancient Relic - Full Size
Add a photo to this gallery
Retrieved from "https://agario.fandom.com/wiki/Ancient_Relic?oldid=43899"
Community content is available under CC-BY-SA unless otherwise noted.