75 skin pieces + 2500 coins
Alien Kid is a one of the original set of 32 Mystery Skins that were released in December 2016. A Mystery Skin can be unlocked and then upgraded to animated versions. The three levels of upgrades can be achieved by collecting skin pieces and spending coins.

As a regular Mystery Skin, Alien Kid requires a total of 75 skin pieces and 2500 coins to reach all three levels. The first and base state, Level 1, is unlocked after collecting just 5 skin pieces. The upgrade to Level 2 requires 20 skins pieces and 500 coins. This is the first animated state and it adds a glowing effect to the base skin. The final upgrade, Level 3, requires 50 skin pieces and 2000 coins. This level includes the Level 2 effect as well as a fade in to an altered version of the base skin. 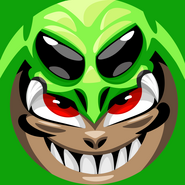 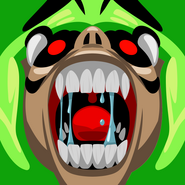 Alien Kid - Full Size / Level 3
Add a photo to this gallery
Retrieved from "https://agario.fandom.com/wiki/Alien_Kid?oldid=39460"
Community content is available under CC-BY-SA unless otherwise noted.